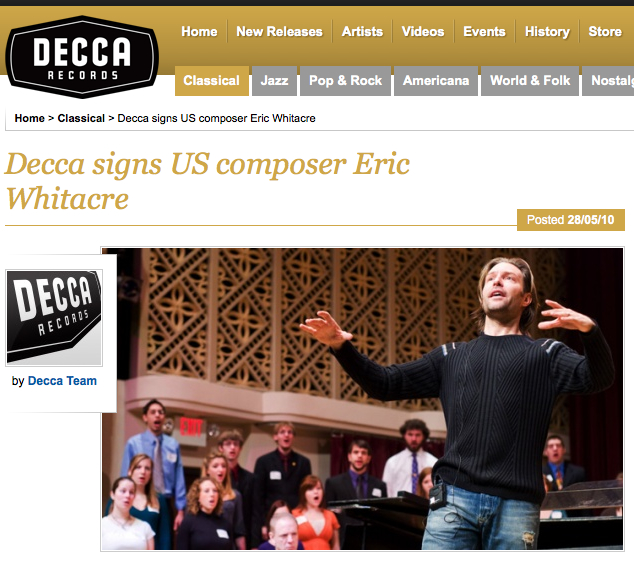 I’ve just signed an exclusive recording contract with Decca!  The first album will be recorded this August and will be called (obviously) Light and Gold. (BTW, right now cover #2 is by far the favorite choice, with #3 a distant second).

Decca is delighted to announce the signing of American composer, Eric Whitacre. With this global deal Whitacre joins an elite handful of composers to have secured an exclusive, long-term recording contract with a major label.

Whitacre records his debut Decca album ‘Light & Gold’ in London at the beginning of August with a choral group to include the Eric Whitacre Singers. The album will include some of Whitacre’s best-loved choral works as well as three World Première recordings and will be released in the UK on 18th October. This will be the first time Whitacre has both recorded and conducted his own music.

Eric Whitacre has quickly become one of the most popular and performed composers of his generation. Incredibly for a young classical composer of his stature, he had no formal training before the age of 18 but his life was transformed when he ‘accidentally’ sang Mozart’s Requiem as a student. He has since trained at the Juilliard School and received a Grammy nomination for his choral music.

Whitacre is appealing to musicians of all ages not only through his beautifully ethereal lines but also his innovative forays into the digital world. He recently created a social media phenomenon with his ‘Virtual Choir’ in which he assembled 185 singers from across the globe to perform ‘Lux Aurumque’. The YouTube clip has already attracted almost a million hits in just two months.

Whitacre, also a keen blogger, has asked his fans to help select their favourite cover for the new album through his website www.ericwhitacre.com

Eric Whitacre added: “I couldn’t be more excited to be working with Decca – the company’s rich artistic history and commercial success is unassailable, and to be on the same label as Cecilia Bartoli, Bryn Terfel, Jamie Cullum and Sting is amazing. I appreciate the respect that the team at Decca holds for me as one of their ‘core classical’ artists. Importantly, we have a shared vision, drive and passion to develop the extraordinarily wonderful opportunities that technology offers to our world.”